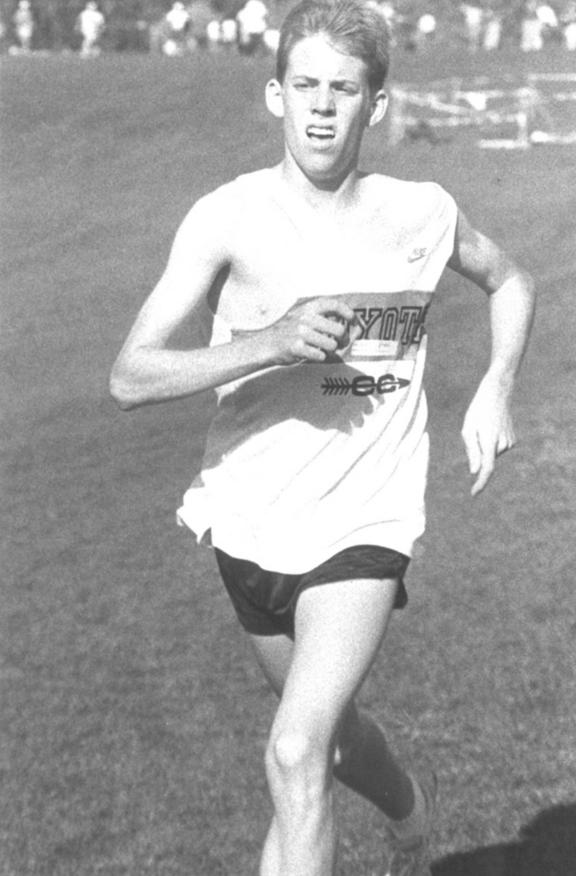 Corey Ihmels competing in a cross country meet from the late 1980s or early 1990s. He was the fIrst Class A runner to win three consecutive state titles. Photo courtesy of the Bismarck Tribune 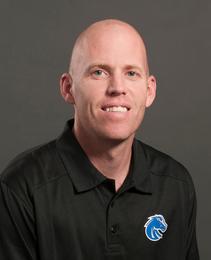 Where are they now:

Q: What advice can you give young athletes today that are involved in high school activities? What should they be most focused on?
A: I wouldn’t have had all the experiences or opportunities had I not been involved in high school activities. I think it’s important to be involved in multiple things during your high school years and really take time to enjoy that process. I had a tremendous experience growing up in North Dakota and having all the opportunities as well as wonderful mentors along that way, from seventh grade basketball to high school cross country. Enjoy those experiences and listen to your coaches/mentors. If you can focus on those things, that will set you up for great things in the future.

Q: Tell me a little about your family. What hobbies/interests you like to do?

Q: Anything else to add?
A: I enjoy seeing the WDA old school shots come across my Twitter feed, brings back many memories and leaves me being thankful for growing up in that environment. Some of my earliest sports memories are watching the WDA Basketball Tournament on TV, or in person and dreaming about being an athlete that competes at that level. I was very fortunate to be around some fantastic coaches in the WDA during my time and that impact made me into the person I am today.

Did You Know: Ihmels won the Foot Locker National Cross Country Championships in 1991 and was a member of the 1994 NCAA cross country championship team from Iowa State University.

In the late 1980s and early 1990s, there was one name that every North Dakota distance running athlete and coach was familiar with.

The Williston athlete dominated both in cross country and track distance events during his high years.

He won three consecutive state cross country titles (1989-91) and capped off his high school career by winning the Foot Locker National Cross Country Championships in the fall of 1991. He completed the 5K course in a time of 15:03. To date, he is the only North Dakotan to win the national meet. In track, he won the several state distance titles and still holds the record in the 3200 meter run (9:03.65).

Following high school, he attended and competed at Iowa State University in both cross country and track-field. He was part of a NCAA championship CC team in 1994. Ihmels finished 13th overall.

Today, running is still very much part of his life as he is now in his seventh year as head cross country and track-field coach at Boise State University.

Q. In addition to cross country and track-field, were there other sports/activities you took part in?
I played basketball as well, varsity my sophomore and junior years, but didn’t play my senior year to concentrate on cross country/track and field. Band my freshmen year until it started to conflict with sports.

Q. What accomplishments were you particularly proud of?
A: Winning the National High School Cross Country title my senior year. It was a product of great coaching, hard work and nobody ever telling me I couldn’t do something on the national level coming from North Dakota. I didn’t know any different. I just wanted to be the best.
Also, despite bad weather breaking the 3200 meter record at the state track meet in 1992. (weather gets worse each passing year!)

Q. Where did you attend college and what sport(s) did you compete in?
A: Iowa State University in Cross Country / Track and Field.

Q. What were some of the main differences, challenges of competing in college opposed to high school?
A: It seems like a long time ago, but I would just say the level of competition is just so much greater. It certainly is a transition, but I really feel like I was prepared for that transition with guidance from my parents and coaches growing up. I also feel like it was something I was really looking forward to as well so that helped the transition be a little smoother.

Q. Was there a particular season/individual or team accomplishment you were most proud of?
A: Our team winning the NCAA Cross Country Championship in Fall of 1994. It was a collection of guys committed to each other with one common goal. Things certainly came together for us that fall but we weren’t going to let anything get in our way.

Q. What degree(s) did you pursue/receive in college?
A: Bachelors in History, Masters in Education.

Q. Following college, where did you go?
A: I continued to run post-collegiately for a few years in the pacific northwest and then attended graduate school at Arizona State University before embarking on a coaching career.

Q. Did you begin a collegiate coaching career right away or did you work outside athletics before coaching full time?
A: My degree was in History/Education, so I substitute taught in a few different school districts while continuing to run. Eventually starting a graduate assistantship with the track and field program at Arizona State with thoughts of possibly teaching/coaching at the high school level or possibly collegiately.

Q. You are currently at Boise State University? How long have you been with the Bronco program?
A: I am in my seventh year as head coach of both Men’s and Women’s Track and Field/Cross Country programs.

Q: What has been some of the challenges of coaching at the collegiate level? What are some of the rewards?
A: Collegiate coaching is a grind, there is no on or off button. If I could choose between being an athlete or coach at the collegiate level, I would choose athlete every time. Your success is dependent on other people staying the course and executing day-in and day-out. That is challenging to say the least.

That being said, there are many rewards. Seeing the athletes come together as a team and reaching goals and aspirations they didn’t even think was possible. I also feel like it’s been a positive to have my own kids have the opportunity to interact and be around collegiate athletes.