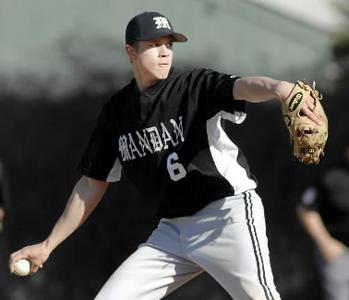 Mandan's Jay Flaa made his Major League Baseball debut with the Baltimore Orioles in 2021. He was a standout high school player, eventually playing collegiate ball at the Univ. of Mary and NDSU. (Photo courtesy of the Bismarck Tribune). 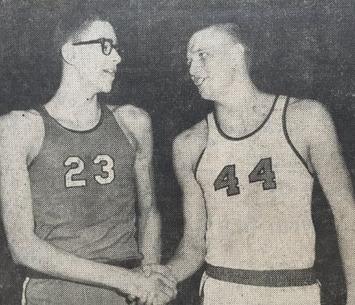 Two of the all-time great WDA basketball players -- Williston's Phil Jackson (left) Rugby's Paul Presthus (right) shake hands before a meeting in the 1961-62 season. The two rivals led their squads to the state tournament and were among the state scoring leaders in all of their years in varsity play. Jackson went on to play collegiately at the  Univ. of North Dakota. Presthus, meanwhile, played at the Univ. of Minnesota. (Photo courtesy of the Pierce Co. Tribune, Rugby, ND.)

Minot's Dagny Knutson qualified for the U.S. Olympic swimming trials and set a national record in the 200 Freestyle in 2008. She won a remarkable 21 state titles (individual and relay) in her career for the Majettes. (Photo courtesy of Will Kincaid of the Bismarck Tribune). 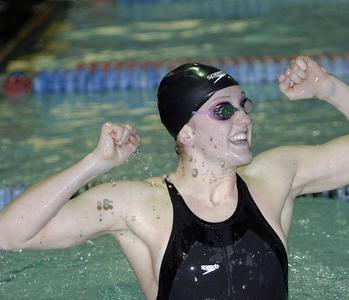 Dickinson's Becki Wells was a dominant cross country runner in the early 1990s. She won three WDA titles and back-to-back state crowns.  (Photo by Tom Stromme of the Bismarck Tribune.) 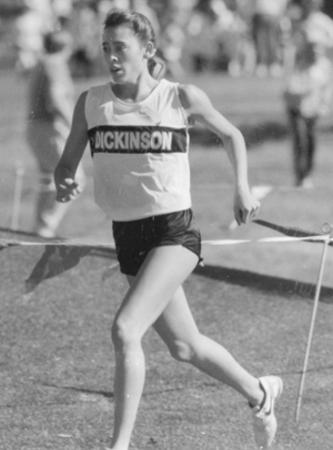 The Western Dakota Association (WDA) has the distinction of being North Dakota’s oldest Class A high school athletic conference – and its most successful. Now in its 82nd year, the conference has produced over 400 state team championships and numerous individual titles sponsored through the North Dakota High School Activities Association (NDHSAA).

The WDA was established in 1938 by five schools –  Bismarck (Central) High, Dickinson (Central), Mandan, Minot and Williston. Since then, the WDA has expanded its membership and the number of sponsored sports/activities. Today, the five charter schools along with St. Mary’s of Bismarck, Jamestown, Bismarck Century, Turtle Mountain Community High School of Belcourt, Bismarck Legacy and Watford City give the conference 11 members. Bottineau-Rugby and Hazen-Beulah are presently associate members, participating in boys' hockey.
The conference sponsors team championships in boys and girls sports administered by the NDHSAA. Football was the first sport the WDA awarded a regular season champion. Today, there are 22 sports conducted over three sports seasons. The fall season includes: football, volleyball, cross country (Boys/Girls), soccer (B), swimming and diving (G), tennis (B) and golf (G). The winter season: basketball (B/G), wrestling, hockey (B/G), gymnastics and swimming and diving (B). The spring season: track (B/G), baseball, softball, golf (B), tennis (G), soccer (G). In addition to annual team and individual conference awards, the WDA recognizes outstanding academic achievement through team and individual scholar athlete awards. The conference celebrated its 75th anniversary in 2013-14.
Formation and expansion
In the late 1930s, North Dakota’s largest high schools, determined by enrollment, were part of an East-West Class A Conference recognized by the High School League (later to be renamed the NDHSAA). To keep travel costs to a minimum, and mainly out of convenience, schools would schedule football games against schools in their immediate area.
Unfortunately, schools based in far western N.D. had a more difficult time filling their schedules since they had fewer programs of comparable size around them. These schools often would resort to playing teams from neighboring Montana.
To remedy this problem and create continuity in football scheduling, five schools – Bismarck (Central) High, Dickinson (Central), Mandan, Minot and Williston – agreed to form a western division within the Class A East-West Conference. And with that, the Western Dakota Association was created in 1938.
The look of the conference has changed over its eight-plus decades of existence. It expanded from its original five schools to eight in 1944 when St. Mary’s of Bismarck, St. Leo’s of Minot (later to be known as Bishop Ryan) and Jamestown joined. St. Leo’s initial stay was brief, however.
After one season it left the conference to compete against smaller schools in its region. St. Leo’s returned for two football seasons in 1952-53. In 1954, Rugby was admitted and participated in the football conference.

Bismarck High wrestler Scott Glasser won several individual state championships during his time at Bismarck High in the 2000s and eventually had a successful career at the Univ. of Minnesota. (Photo courtesy of the Bismarck Tribune.)

This is the Western Dakota Association 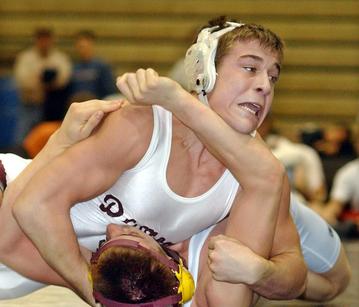