Bismarck High, Mandan and Century all defended its home court in boys' basketball play on Tuesday, Jan. 28, and in the process, earned regular season sweeps over its opponents. Mandan held off Legacy. Bismarck High defeated Minot in an up-tempo battle. Century defeated Dickinson in a low-scoring affair. The outcomes created a little shake up near the top of the standings. Bismarck High moved up to second with the win while Minot and Dickinson dropped a spot. For current standings, upcoming games, click Here

WDA leader Minot had its hands full at Bottineau-Rugby in boys' hockey on Tuesday, Jan. 28, needing an empty net goal to eventually secure a 3-1 win. The game was worth six points in the standings. The victory moves the Magi six points away from clinching the WDA  title. Elsewhere, Century rallied from an early deficit to top visiting Dickinson. Williston shutout Hazen-Beulah.  For current standings, upcoming games, click Here 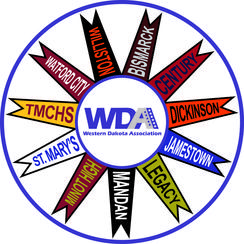 Click on a WDA sponsoring partner for more information